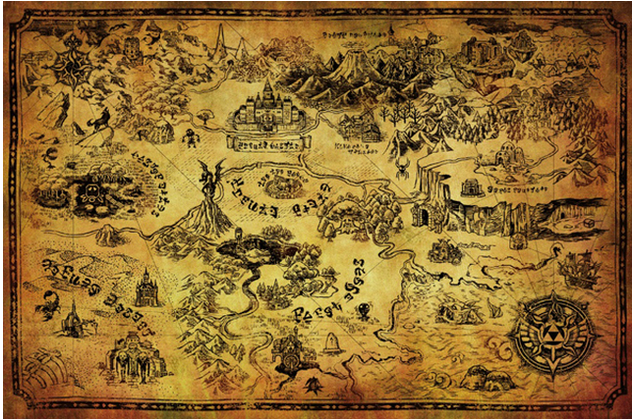 If you even dare call yourself any kind of gamer, and you’re older than ten, then you know about the Legend of Zelda. For many years, The Legend of Zelda was emblematic of Nintendo the way Mario was. That’s one of the things that made Nintendo great: it didn’t just have one flagship character. Between Mario, Link, Pikachu, Donkey Kong, and others, Nintendo provided a whole host of memorable characters, any one of whom could have carried a gaming company on their own. And back in the late 90s, when the Nintendo 64 was the hot new thing, there was a single Zelda game that stood head and shoulders above the rest: Ocarina of Time. And there are some little-known facts about it still, after all these years. You might hear some of these if you strike up a conversation with a guy in a Legend of Zelda t shirt.

A lot of people don’t know this, but The Legend of Zelda: Ocarina of Time was originally going to be a very similar game to Mario 64. The idea was the Ganon’s Castle would be like Peach’s Castle. In Mario 64, Mario moved between different worlds by jumping into paintings, each of which contained its own miniature game world. This idea was also going to be used in Ocarina of Time, but was eventually scrapped in favor of a more open world. Interestingly, the Phantom Ganon boss in the Forest Temple, who goes in and out of paintings, is a remnant of this older approach.

Another easter egg, well known among die hard fans, is the Nintendo characters in the castle. When you first go to see Princess Zelda, you will notice that there are windows on the side of the courtyard where Zelda is peeking in to look at Ganondorf and the King. If you go to those windows and use the C-up button to look closely, you’ll be able to look through them. On the other side are paintings of Nintendo characters like Mario and Yoshi! This is a hidden easter egg that a lot of us learned from gaming strategy guides back when the game first came out.

You can fight giant stalchildren if you want. If you played Ocarina of Time as a kid, you probably remember the stalchidlren, the little skeletons that came up out of the ground if you were caught outside at night. Well, there is a way to summon a giant stalchild to fight. You can do this by killing many stalchildren in rapid succession. If you do it right, and believe me you have to do this fast for it to work, then a single giant stalchild will rise from the ground! This stalchild is three times the size of an ordinary stalchild and will give you a lot of rupees when it dies. Another combat-based factoid is the ability to paralyze redeads with the Sun’s Song. Playing the Sun’s Song around a redead will paralyze it, allowing you to escape.